Posted on November 10, 2018 by Marilyn Heavilin 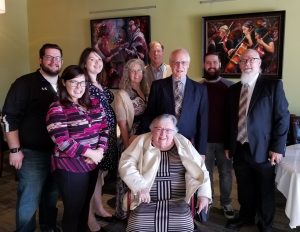 This has been a busy month it started out on October 27th with the anniversary party for our 60th year of marriage. We had about 50 people in attendance for the party. Glen’s brother Al, who was a ring bearer, drove over from Kentucky. We had lots of fun and good conversations all around. The kids and grandchildren sang for us. That was a real surprise for me. Glen and I gave tributes and I think a good time was had by all.

Then the following Sunday was my birthday, November 4.  Martha’s mother chose that day for the baby shower and at 6 o’clock we returned to the church for an Ann Downing concert because I like her singing and she is a good friend of mine. The concert was wonderful and we made it to an 8:00 pm dessert in my honor given by Matthew for my birthday. 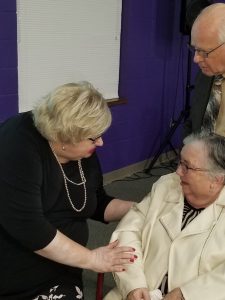 We were also able to see Liz Curtis Higgs as she was speaking at a church not too far from where we live. It was special to see both of these women as it may be the last time that I see them before I see them in heaven.

For my birthday, Matthew, bought me and all of his family the new JBL-Link-View with  Google assistant. Matt says he bought it for the rest of the family so that mom would have someone to talk to. It sets quietly on the coffee table until we say “Hey Google!” Then it wakes up to do something we ask. If we say good morning it will respond with the weather report and read our calendar for the day. It can answer questions and also make video calls to people in our contact list. We can call Matt and have a video chat while seated on our couch.

Believe it or not, we had snow yesterday. It was cold enough to snow. It was 28°! It is only November and the trees have the leaves on them that show the color.  It made a beautiful display this morning.

Our daughter flew in from California for our anniversary but she was not able to stay for the anniversary party. She had to fly out early on Saturday morning.

Please pray for Glen as he is doing double time at home and now the doctors feel there might be something wrong with his heart. He is undergoing some tests and talking with the doctors. He is well taken care of but it is still a stressful time for him and for all of us. Please pray that it will be nothing and that his prayers and ours will be answered positively.