Posted on December 31, 2018 by Marilyn Heavilin

We have had lots of excitement during the last few weeks. 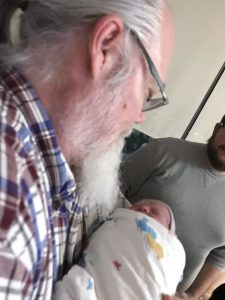 We’ve been waiting for our first great-grandchild. Now she’s here! Our precious little Naomi Joy made her appearance on December 28. She is a doll and looks most like Nathan did when he was small. Here’s a picture of Naomi in Matthew’s arms and you can get a glimpse of Nate in the background.

As a follow-up for his heart, Glen had his nuclear stress test on December 19. We had planned for a big day, but he was back home before noon. They had told him that it could take up to as long as eight hours. So he was pleased that it only took four hours. He passed it with flying colors. They told him that as soon as they could they would pass the word all along that he was fine. The tests came back “no problems, no problems, no problems.” We thank the Lord for those results. Glen is Marilyn’s 24/7 caregiver so a good report on his heart is greatly appreciated.

We had Christmas. And it was lots of food and lots of fun. The main meal was at Matt’s and desert was at our apartment.

Marilyn has had trouble with breathing for the past couple of weeks. One of the results is that she gets out of breath while speaking. This morning we went across the street to the clinic and had x-rays of her lungs. She seems to be slightly better, but we are waiting for a report on those x-rays.

Seems like there is always something new just ahead.

Thank you all so much for you continued prayers.